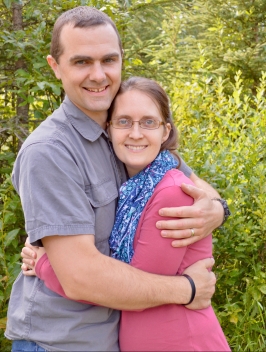 Our Lord impressed on both Jeffrey and Bethany as young teenagers, “I want you to be a missionary.”

Born in California and saved at age 5, Jeffrey grew up in a Christian home, both in the US and later in England where his father retired from the AirForce and followed the Lord’s calling into missions. From “military kid” to “missionary kid,” Jeffrey held a strong desire to work for the Lord and knew at age 13 that he wanted to become a missionary pilot. He pursued aviation to reach that goal. He saw the need for the Gospel and for missionary pilots first-hand in 1999 in Papua New Guinea as part of a workgroup to complete several tasks for missionaries. At age 18 he gained his private pilot’s license and then pursued Biblical training at New Tribes Bible Institute in Wisconsin.

Bethany, born in California and raised in a Christian home, also came to know the Lord with child-like faith at age 5. Her parents’ involvement with international students, their commitment to pray for missionary friends, and several mission trips introduced Bethany early in life to the need for God’s Word to abide in the lives of people all over the world. Following this call led her to New Tribes Bible Institute as well.

Jeffrey and Bethany found each other at Bible School and realized that God desired them to serve Him together. After marrying in January 2006, they moved to MI and Jeffrey attended the School of Missionary Aviation Technology for his aircraft mechanic’s license. Soon after, Compass Aviation in North Carolina became home to gain the flight and maintenance experience needed. As an equipped pilot/mechanic family, they searched for God’s direction to a field of service, which lead them to Arctic Barnabas Ministries (ABM). Jeffrey and Bethany have been absolutely amazed at how God so closely knit their hearts’ desires with that of ABM.

Serving with ABM they desire to live out their life verses:

“As every man hath received the gift, even so, minister the same one to another, as good stewards of the manifold grace of God. If any man speaks, let him speak as the oracles of God; if any man minister, let him do it as of the ability which God giveth: that God in all things may be glorified through Jesus Christ, to whom be praise and dominion for ever and ever. Amen.” I Peter 4:10-11.

“I am crucified with Christ: nevertheless I live; yet not I, but Christ lives in me: and the life which I now live in the flesh I live by the faith of the Son of God, who loved me, and gave himself for me” Galatians 2:20.